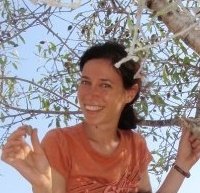 Karin credits Eco-Israel with strengthening her commitment to living sustainability and creating a more sustainable, simpler, and more integrated food system.  Since returning from Eco-Israel she joined her shul’s compost committee and is proud to say that their Shabbat kiddush for about 60 people produces almost zero waste!

Karin has been immersed in the food systems field since 2004, when she worked at Teachers College, Columbia University’s LiFE (Linking Food and the Environment) Program, an award-winning, food-based science curriculum. She then spent three years at the Food Bank for New York City, as a Community Program Specialist, building the capacity of the Food Bank’s emergency food program network.  At the Food Bank, Ms. Fleisch won a United Way Junior Fellowship as “one of 25 emerging leaders in New York City’s non-profit sector.”   Craving immediate, direct knowledge of food/agriculture, she apprenticed at Hava & Adam Ecological Farm in Modiin, Israel, where she lived in a geodesic dome and grew vegetables from September 2008 until February 2009. Post-farm life, Karin consulted for non-profits in the fields of food systems, food security, and sustainability. Her clients included Leket Israel, Israel’s national food bank.  In June 2009, she participated in the ROI Global Summit for Young Jewish Innovators, after which she returned to the Food Bank, as Manager of Member Services. In this capacity, she oversees member program recruitment and manages a staff of four Specialists who guide, advise and monitor NYC’s 1000+ soup kitchens and food pantries. She also sits on the board of Uri L’Tzedek and is a compliance officer for the Tav HaYosher (an ethical seal to certify kosher restaurants that respect basic labor standards). She studied Philosophy and Political Science at Boston University, graduating with honors in 2003.

Want to join the discussion?
Feel free to contribute!